This USDA-supported direct feeding program targets 2,500 poor families (nearly 15,000 individuals), through hospitals, clinics, health centers, dispensaries and other health facilities. Recipients are mainly HIV/AIDS sufferers and their families, poor mothers and children 12 years of age. Most of the children helped are affected by malnutrition, diarrhea and malaria. Many of the proposed facilities are privately operated and receive no money from the government. Indeed, the government’s resources have been exhausted in the recent civil conflict.Implementing a USAID/ IFRP (International Food Relief Partnership)    program, which distributes 4,000,000 nutritious meals through hospitals, clinics, health centers, dispensaries and other health facilities, in conjunction with its local partner Caritas, IPHD addresses the very serious CAR food security problems in the following ways:Provide an immediate nutritional, shelf-stable food resource to the most vulnerable populations through a reliable distribution strategy, which will help address malnutrition and assist HIV/AIDS victims and their families.Allow health institutions to provide food assistance to those most in need and thereby expand their client base.Provide sufficient quantity/variety of food to periodically supplement local meals or in many cases provide food at mealtime when there would not otherwise be food available for targeted beneficiaries, thereby conserving the financial resources of CAR’s most poor, especially HIV/AIDS affected families.All of IPHD's activities in the Central African Republic are jointly carried out by its partner NGOs, Caritas (humanitarian agency of the Catholic Church), and the Salesian Fathers (a Catholic religious order).Since 2002, IPHD has helped the Salesian Vocational Center for training youth outside of Bangui with funds to: improve its farmland and agricultural training program, provide carpentry equipment, computers, copy machine, water supply, and to pay some of the teachers' salaries until the Center could be more self-sustaining.IPHD initiated a rural water development program with USDA-generated resources.  In the first phase of this program, eight (8) wells were developed, each benefiting 250 or more families.  Four were located in the Diocese of Bambari, and the other four in the Diocese of Kago.  In the second phase, IPHD is developing 30 new village wells to benefit 3,600 families.  At each village that benefits from a well, IPHD trains a water committee to supervise the use of the well and to act as a village repair group.  Each committee charges US$0.02 cents per bucket of water.  These funds are set aside for well repairs or other needs in the village.  It is amazing how successful the pay-per-bucket system functions.With grants from UNICEF and the US. Office of Foreign Disaster Assistance (OFDA), IPHD has spent $760,000 on repairing 177 broken pumps, developing 20 new bore-hole wells, coupled with a sanitation and hygiene program that includes the installation of 3,000 family and village latrines, training over 200 water and sanitation committees, and distribution of emergency water kits.  This program is almost completed.  The geographical target was the northern region of the country where a civil war has destroyed most villages, with many people hiding in the "bush" and only returning to their villages when the IPHD team arrives to repair the water system.  In part, this conflict has been aggravated by the spill-over of the Darfur conflict in Western Sudan.  The program should be continued, but the US Government has made a decision to no longer fund it.  It is a folly of the US Government. 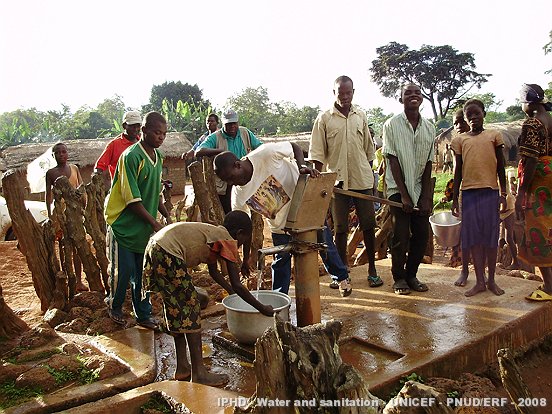 Between 2003 and 2005, with support from USDA, IPHD established a food security bank for farmers in Mbaiki, southwestern Central African Republic.  Over 870 farmers participated in the bank, with their income often doubling.  Because of the success of this food bank, in 2007 IPHD began the development of four more food banks.  By eliminating the middleman, and being indebted to him before the harvest, farmers now have greater purchasing power to buy better seeds and plants, tools, medicine for their families, and to pay required school fees so their children can attend school.In 2003-04, IPHD set up a farmer loan fund that reached 817 farmers, with a 100 percent repayment.  This is being increased in 2007 buy a USDA grant of $460,000 to reach another 1,500 to 2,000 farmers.  The project includes an agricultural extension component.One of IPHD's most successful projects is the grant program for women who have lost their spouse due to HIV?AIDS.  Between 2004-2006, IPHD made 659 grants for women to establish an income-generating activity to help bring their family an income to survive on.  Grants were used to start village food shops, sewing and tailoring shops, hairdressing,, food processing, chicken-raising, and many similar activities.  The project was so successful that IPHD will add US$198,000 to it in 2007 to help another 210 widows.  The project includes components on marketing, management and handling HIV/AIDS stigmas.  This is combined with an HIV/AIDS prevention and testing program that reached 49,000 people. A mobil HIV team was set up in 2004.  In the first batch of 10,000 tests, 1,650 were positive.  ARV treatment is provided for many individuals who test positive.In 2007, with USDA support of $267,408, IPHD is beginning to rehabilitate the river fishing industry that was destroyed by civil war.  At least 1,200 fishermen will benefit from nets, refrigeration, motors for canoes, and improved marketing skills.In 2007, through a donation from Medical Missionaries in Virginia, IPHD sent a 40-foot container to the CAR with medical equipment and medicines valued at over US$600,000.Since 2002, IPHD's support of projects and activities in the Central African Republic has been valued at over $13 million.